I love the internet! It allows us all to be connected and for me to see all types of interesting things. Many of the things I find randomly scrolling through Facebook. One day I was doing this and I saw the coolest thing. Any of you ever thought about creating a proposal video? Me either. Well this guy did and he just blew my mind.

The way he pulled it off was just amazing. The girlfriend went to a movie with his brother. When the previews started, the proposal video came on. It was a film of the boyfriend asking the father’s permission to marry her. After a lot of really cool dialogue (and permission), he runs off to go get the girl. The video then proceeds to follow him on his journey to the movie theatre. 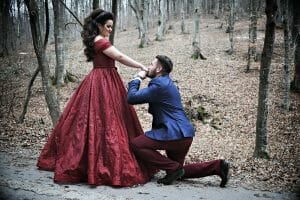 One of the best things was the live action recorded. The girlfriend was being filmed, so we got to see her reactions during the whole thing. The created film ends with him opening the theatre door. Then they recorded the real live event and the proposal.

I love watching proposals in general. It’s always interesting to see how creative people can be, and I love it when people put a ton of effort into the process. This guy went above and beyond. I can’t imagine how much planning that took, but then to create a proposal video and actually have it shown on the big screen…that’s crazy!

Video is so awesome and there are so many different ways to use it. Creating a proposal video is one of the most creative ways I’ve seen. There’s also a video that was played during a ceremony of the couple’s dog bringing the ring to the ceremony. Anyway, if you know of any other cool wedding videos, please let me know. These make my day!