Wedding videos have changed so much over the past 25 years. In the past videographers were really limited with the technology, and now videographers are more like filmmakers. Most of my couples are mainly interested in our cinematic wedding films, so should you get a ceremony video as well?

Should you get a Ceremony Video?

Our cinematic wedding films are a creative summary of the entire day. The great thing about that is the films are entertaining and cover pretty much everything that happened, but only a little piece of each event. A ceremony video gives you the entire ceremony from start to finish. 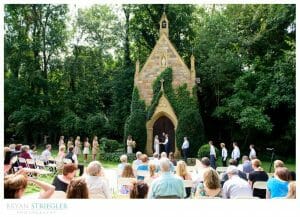 Having the full ceremony gives you all the things that were said and happen. Most likely the cinematic film will only give you a few of these things. You might miss out on people walking down the aisle or certain parts of the vows. I know when I make cinematic films I have to cut some of these things out.

Will anyone really watch a ceremony video though? More than you think. All of your friends might not want to watch it, but I’m sure your family members will. Ceremony videos aren’t as boring as most people think. In the past it was usually one angle and bad audio. Now videographers will use multiple cameras and put a mic on the groom and officiant.

I’m not sure about other videographers, but I go ahead and include the ceremony video in my collections. I’m going to record the whole thing so I can use it for the cinematic film anyway, so I might as well include it. If your videographer doesn’t include it, you might ask how much they charge. It’s pretty easy to edit, so I hope it wouldn’t be much more.

I love that people are finally realizing the importance of having a wedding film, but I also think a ceremony video is extremely important as well. It might not be as entertaining or artsy as the cinematic film, but it’s still an important part of the day that needs to be remembered.